The Advanced Warning and Response Network (AWARN) Alliance is an international coalition of broadcasters, consumer electronics makers, B2B tech companies, and trade associations that is using the emerging technology of NEXTGEN TV to greatly improve public alerting and informing. We are creating a framework of best practices for a next generation emergency messaging (NGEM) system: a “network of networks” built on the resilient backbone of ATSC 3.0, that is based upon and enhanced by technology innovation, synergistic workflows, and input from diverse community stakeholders.

Broadcasters have the spectrum, the infrastructure, the trust of their communities, and now, the technology to provide a whole new level of public safety for their communities. The diverse stakeholders and industry players in the AWARN Alliance are coming together to answer the “what” question about advanced alerting, while our tech members and partners are answering “how.” AWARN is the place to exchange ideas and foster innovation among cooperative competitors.

ATSC 3.0 is more than TV – it is a flexible, cutting edge technology platform that can serve as a resilient backbone for in integrated “network of networks.” NEXTGEN Alerting will be resilient, geo-targeted, interoperable, and will even carry rich media – in short, it will revolutionize the way we alert and inform the public before, during, and after emergencies.

When fully deployed, can deliver geo-targeted, rich-media alerts to an unlimited number of enabled TVs, connected cars, and handheld devices even when cellular fails or the grid is down.

New Tech for Public Good: Help save lives and protect communities with new technology. Build a powerful network to highlight your company’s leadership in using NEXTGEN TV to improve communities locally and nationally

The Pulse of NEXTGEN TV: Access cutting edge information about NEXTGEN TV tech and deployments. Gain a competitive edge by helping to determine the future of emergency alerting, news, and information 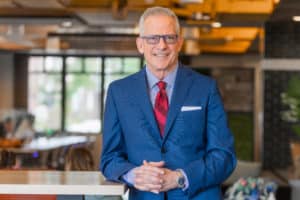 John Lawson serves as Executive Director of the Advanced Warning and Response Network (AWARN) Alliance, an international coalition of broadcasting, consumer electronics, and professional tech companies. The Alliance is leveraging Next Generation Television (ATSC 3.0) to develop an advanced system for emergency alerting, news, and information.

John was one of four signatories to the original Joint Petition that led to FCC approval of ATSC 3.0 transmission in 2017. John served on FEMA’s National Advisory Council IPAWS Subcommittee (2017-2018) and graduated from FEMA’s Emergency Management Executive Academy (2018). He was an expert panelist at the White House Earthquake Resilience Summit in 2016 and has served on three FCC emergency communications advisory committees.

John began his work on advanced alerting while CEO of the Association of Public Television Stations during the 9/11 attacks. He was Executive VP of ION Media Networks and Executive Director of the Mobile500 Alliance. Board service includes the National Association of Broadcasters, the Open Mobile Video Coalition, and Senior Warden of Historic Christ Church in Alexandria, Virginia.

His awards include the Individual Technology Leadership Award from TV of Tomorrow in 2018 and the Academy of Digital Television Pioneers Award from CES in 2008. John earned BA and MA degrees in International Studies at the University of South Carolina.